Police chief admits Thailand is an epicentre of drugs trafficking 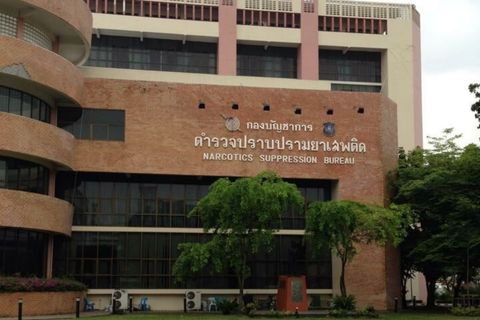 TheThaiger – The Narcotics Suppression Bureau (NSB) admitted yesterday that Thailand has become the epicentre of drug trafficking in Southeast Asia.

The NSB acknowledged the claim after several high-profile drug trafficking cases were made known in the public domain and highlighted by the recent arrest of a Chinese couple trying to mail heroin to Australia with a street value of about US$500,000, on Wednesday, August 24. And with better transportation links throughout the kingdom, such as the new high-speed train in Laos, it is making it easier for drug barons to move narcotics around and through east Asian countries.

The NSB Commissioner, Pol Lt Gen Sarayuth Sanguanpokhai, accepted Thailand has become a narcotics transit hub for foreign drug traffickers because the nation is so open to tourism but says his team is determined to stamp it out.

“Tourism contributes a large part of Thailand’s revenues. We have many tourism campaigns attracting foreign tourists. However, at the same time, foreign drug traffickers enter the country with a tourist visa and run their businesses here while disguised as tourists.”

Officers from the NSB swooped in to arrest the Chinese couple, 48 year old Jun Dai, and 28 year old Jiali Xie, in front of a chicken rice shop in Sam Phran district of Nakhon Pathom province. They were trying to smuggle 4.19 kilograms of heroin through a mail package to Australia.

Officers then seized assets worth 9.3 million baht (US$257,200), including gold, and six condominium rooms in Bangkok, and Pattaya.

The investigation revealed the Chinese couple are suspected of being involved in a drug network in Myanmar. Officers were tracking down other Thai and Chinese accomplices connected to the drug ring.

Pol Lt Gen Sarayuth added the kingdom is surrounded by countries where methamphetamine production is productive, making it convenient to transport the drug.

“Public transportation systems in Thailand, Laos, and China are improving. A train ride from China to mainland Southeast Asian countries only takes several hours. Moreover, many low-cost airlines have flights in this region.

“So, it is even more convenient for traffickers to smuggle drugs into Thailand before shipping them to the country of destination, especially when China reopens after the pandemic.

“The NSB is working closely with the Chinese police attaché, charge d’affaires, and the National Narcotics Control Commission in China to solve crimes related to drugs smuggled through Thailand by Chinese traffickers. Moreover, we have teamed up with the Australian Federal Police (AFP) to cooperate in combatting narcotics.”

The Royal Thai Police assigned a special task force composed of the Office of the Narcotics Control Board, the Anti-Money Laundering Office, and the Department of Special Investigation to work with the AFP.

The task force focuses on stopping the trafficking of drugs, money-laundering crimes, and transnational organised crime. It has developed a shared database where officers can quickly access the intelligence and analysis acquired from investigations.